Today, we’re going to feature the Open Access movement from the faculty/researchers’ perspective. The implications of OA for scholarly research are wide-ranging, and interest in pursuing OA initiatives crosses all disciplinary lines. How Open Access will shape the future of scholarly communication remains to be seen, but most in the academic community have a thought or two on the matter. We caught up with Mike Lange, Associate Professor in the Core, to hear what he had to say.

First off, tell us a little about yourself and your background?

I’m an anthropologist who studies folklore. I have an MA in cultural anthro, an MA in Scandinavian lit and language, and a PhD in folklore, all from the University of Wisconsin-Madison. I’ve been doing ethnographic research for over 15 years. I am currently the co-editor of Digest with Diane Tye, a folklorist at Memorial University in Newfoundland, Canada.

Digest is the academic journal of the Foodways Section of the American Folklore Society.

What were the factors that went into opting to make Digest an Open Access journal? 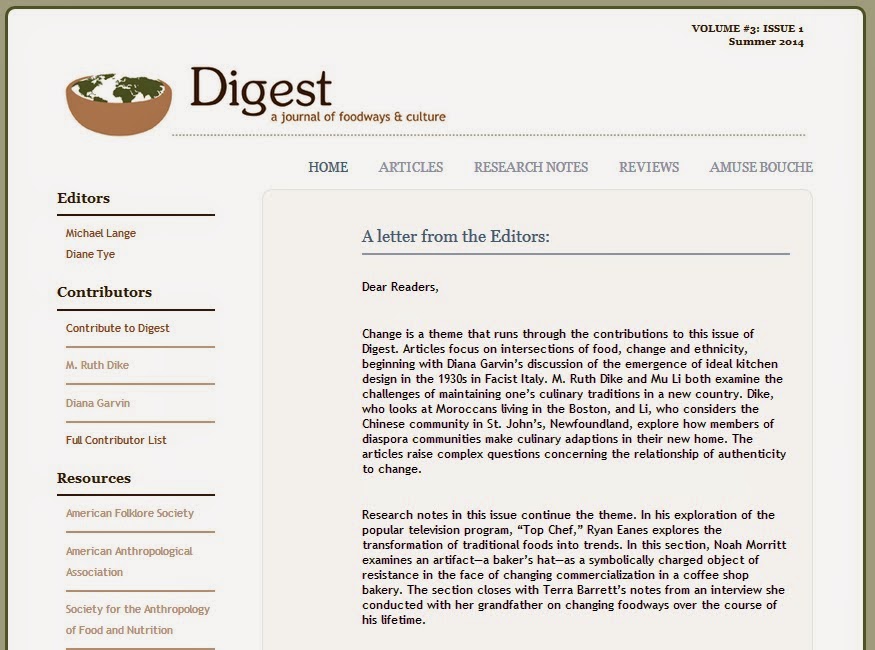 Digest has been around since at least the 1970s, but for quite a while, the journal had been defunct. Some of the biggest hurdles to maintaining its publication included costs, time, and institutional support. By shifting the publication process from exclusively print to exclusively digital, we were able to remove a lot of the costs of publishing and distribution, as well as lowering some of the needs for institutional support.

Who are the authors you are publishing? Are they generally favorable to this model?

Our authors are primarily folklorists and other cultural researchers who do work on food and foodways (the study of food as an aspect of human culture).

You have probably seen many changes to how scholarship is accessed and circulated during your career. How do Open Access resources fit in (ex.: authors posting drafts of their works, Open Access data sets, libraries and museums opening up their archives/collections and making content freely available online)? Have they had a big impact on your research?

Changes in the formats of research dissemination have had relatively little impact on my own research. I am not that much of a user of electronic communications technologies, so I don’t take part in the examples you note here.

Do you see it as a positive development in your field(s) or for academia in general?

Personally, I am indifferent to the shift toward Open Access as a norm for academic publishing. What is more important to me is that the concepts of expertise and peer review remain, and that can be done with Open Access forms of dissemination.

There are important conversations happening around Open Access in all disciplines. And not everyone agrees. While many scientific fields fully embrace the model, others, such as the the American Historical Association, are more skeptical of what AHA President William Cronon referred to as “open-access absolutism.” Do you have a sense of how your colleagues in the fields of anthropology and folklore studies feel about Open Access?

The two fields of anthropology and folklore have taken fairly different stances toward Open Access.  Anthropology has been more circumspect, while folklore has generally embraced the concept of Open Access. The reasons for the difference are many and varied, but one of the roots is the difference in attitudes historically in the two fields’ understandings of their role. Folklore has for a long time thought of its role as including more advocacy, and the collection and dissemination of the folk culture of (often) marginal or disenfranchised groups. That history makes a concept like Open Access a more natural extension of the attitudes of many folklorists. Anthro, on the other hand, does not have advocacy as thoroughly in its bones, and it is less focused historically collecting aspects of culture. So, the open dissemination part of Open Access does not resonate as loudly on anthro.

Do you have a sense of what some of your colleagues at Champlain think about Open Access?

Since I’m not much of an electronic communications tech user, I don’t really have my finger on that pulse among my colleagues.

To be honest, I think the benefits often espoused for Open Access formats are overblown. There is real benefit to a greater number of people doing real knowledge-making work having their work disseminated to an audience, but the “democratization of information” that is often put forward as part of Open Access is not that important, in my view. The openness of Open Access is more valuable on the production side than it is on the consumption side. Increased access to publishing opportunities for researchers is hugely important in the grand scheme of knowledge making (which is a major role for academia). More people being able to cast their eyes on an article matters less than more people being able to get their articles into the conversation. The idea that it is valuable for more people to read an article ignores that simply having access to read research does not equate to the research having a greater impact. A critical, thinking reader makes a difference, but just having more eyes does not because there is a difference between information and knowledge. In North America, the value of Open Access for students is pretty minimal because most students have access to non-open sources of research through subscriptions at their schools. For young scholars, the increased opportunity to disseminate their work afforded by Open Access venues is very valuable. Too often, the conversations about Open Access are framed only in terms of increased access for people to read the work. The real value is increasing access to publishing opportunities for real research.

As a librarian, I often think of Open Access as a potential teaching tool, not just a means of connecting students to scholarly sources. It’s a helpful way to get students to think about the scholarship they depend on for their coursework, to understand how it is produced, and how it fits into the ecosystem of higher education. In some ways, it touches on both information literacy and financial literacy.

Conversations about Open Access can definitely be used as a teaching moment. The role that knowledge production plays in the making of their college experience is something Champlain talks too little about, and which ought to be incorporated more.

As Joanna pointed out yesterday, there are groups and tools to help students gain greater access to research materials they may be otherwise blocked from. Traditionally, such measures have not been as necessary for members of the research community, as they can appeal to their colleagues for access to materials that reside behind paywalls (or other barriers) in a way that most students cannot. The scholarly community has always been one predicated on a commitment to sharing ideas and resources; and yet, this network is never large enough or truly connected enough to overcome the barriers that currently exist.

The thrust of the OA movement is to help overcome these barriers imposed by a traditional publishing model, give authors greater rights to share their work freely, and to create a system that more easily welcomes researchers from all corners of the research community. Last year, we looked at some of the tools and resources available to individual authors who want to learn more about what OA can do for them. And as was pointed out on Monday, there are coalitions out there that are helping to formalize the process of adopting OA policies at the institutional level.

It’s all good food for thought. The landscapes of publishing, research, and higher education are transforming in response to new platforms for communication and growing financial pressures; Open Access inevitably will be a part of that transformation. It already is, in fact. How large a role it will play remains to be seen, but for now, we hope the progress for OA and the lively debates continue.

And we hope that you will contribute to the debate, as well! If you would like to join the conversation or share your thoughts about Open Access, please do so in the comments section.